Saša Milivojev is a famous writer, poet, journalist columnist and political analyst... One of the most read columnists in Serbia, he is the author of five books, and numerous columns published in various daily newspapers. He is the author of the novel „The Boy from the Yellow House“ and of political speeches. His work has been translated into around twenty languages across the world.

OF DEEP STATE AND WORSHIPERS OF SATAN

LORDS OF THE WORLD

The Ancient of the Days,

can you see what he is wearing,

Cardinal shoes made of children’s skin

wrung out from the veins

Last drop of blood that remains

Come through the secret bunkers

Descend to the underground

To the cities of gold

The gardens in diamonds adorned

Where thousands of children abducted

Cry in the clutches of the devil

They will invite you to dine

Pour adrenalin into your wine

Baby roast on the menu

Bones burning in the fireplace just for you

They will forever be returning

to walk among men in shoes of cardinal skin

Compassion they’ll say is their name

Whilst from those cities underground

Millions of bacteria and viruses

Are killing your world mercilessly

The poles and icebergs they are melting away

Torrents will bring you to dismay

Tsunami will crumble the cities to ruins

Earthquake will shatter graves and dreams

Everything you have they will turn to dust

Drought will ablaze crops to crust

Of hunger millions will die

Poisons are raining from the sky

To the bones of children cast thy eye

to the bottom of the sea where they lie

look inside the savage eyes,

gleaming with innocence of the fallen victims’ cries

The Ancient of the Days can you see

The Heavens are yearning for equity

Without the soul void is poetry

That endures the humiliation silently
Frightened of camps and lethality
- be free.

OF DEEP STATE AND WORSHIPERS OF SATAN - LORDS OF THE WORLD 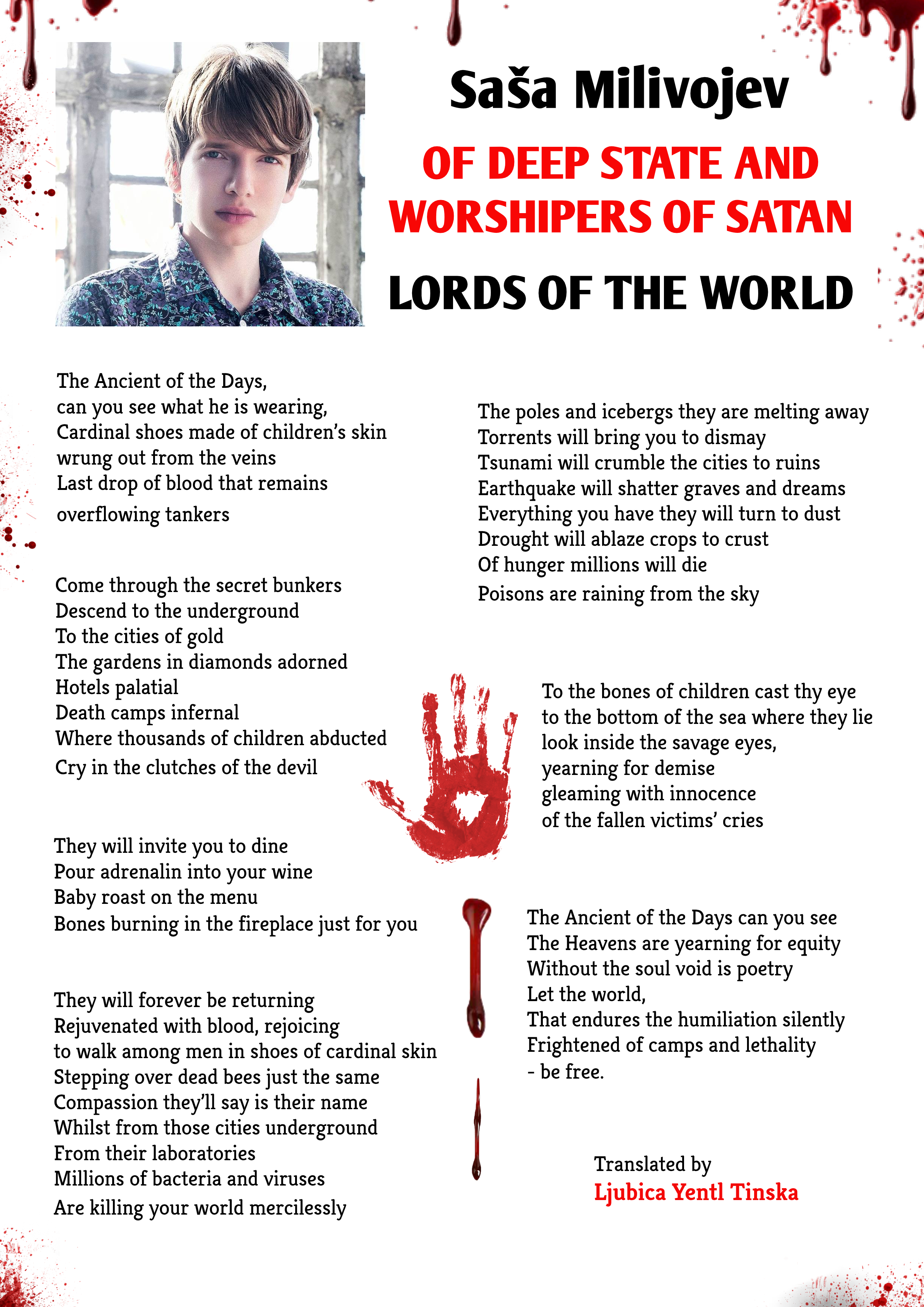 THE OSLO TIMES: Saša Milivojev - The Boy from the Yellow House

Saša Milivojev - When the Firefly is gone - CONTEMPORARIES ABOUT THE AUTHOR

Saša Milivojev - WELTSCHMERZ ("WORLD PAIN") - THE PAIN OF THE WORLD

Saša Milivojev - A CHALICE OF GORE

Saša Milivojev - THE BRIDGE OF SIGHS

Saša Milivojev - TILL THE WORLD’S END

Saša Milivojev - AT THE RIVER’S END

Saša Milivojev - TO PUT THE SUN OUT

Saša Milivojev - AT THE CROSSROADS

Saša Milivojev - THE FIREFLY AND THE WIND